There’s a bright outlook to go with the sunshine in Bordeaux, as Gavin Quinney reports on Jancis Robinson’s website: after excellent conditions for early flowering in May and June, the region is well positioned for the incoming heatwave. If the Bordelais were in need of reminding that hard work and investment are as important as inheriting or buying exceptional terroir, the release of the Liv-Ex biannual reworking of the 1855 classification, an unofficial report aimed at identifying wine-market trends, may serve as an extra incentive not to rest on any laurels. All five First Growths remain at the top, but there are some interesting moves slightly further down that reflect the money and effort invested by certain wineries.

Not to be outdone, Burgundy and Champagne are celebrating a confidence-booster of their own: UNESCO has awarded vineyards in both regions World Heritage status. The Dijon area is, according to the awarding body, “an outstanding example of grape cultivation and wine production developed since the Middle Ages,” while the designated vineyards in Champagne are deemed particularly significant in the early development of méthode champenoise.

Across the Channel, Ridgeview winery in Sussex may one day receive the same honour for helping along the early development of méthode anglaise: the acclaimed purveyor of English sparkling wines turns 20 this year. Cockburn Port, meanwhile, which can add a zero onto that tally, is celebrating its bicentenary by releasing a tiny amount of the ‘forgotten’ 1977 vintage.

And lastly, for sherry lovers it is time to celebrate the impetus that now sends ‘raw’ or unfiltered sherries, known as en rama, over here once a year. These delicious and unusual sherries have the double benefit of being rare and being short-lived: so once you’ve got hold of them, it is only right to drink them within the year, before their lack of filtration and sulphites ruins their fresh, bright flavours. 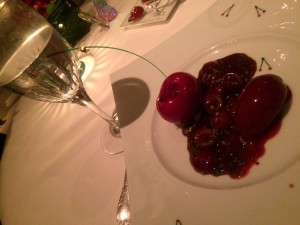 Epicure, Paris: Even Chief Sommelier Marco Pelletier would have a hard time coming up with a better pairing than the combination of himself and Chef Eric Fréchon. Pelletier has an amazing talent for unexpectedly perfect wine matches, while Fréchon’s exquisite food has won this small but perfectly formed restaurant – just 14 tables – 3 Michelin stars. It can be hard, these days, to understand what all the past fuss over haute cuisine was about; at the Hotel Bristol’s flagship restaurant it all becomes clear, but without so much as a hint of fuss.